For the past 18 years, Lifeline/Childline Zambia has helped to restore hope in people undergoing emotional and psychological challenges.

Originally established as a suicide intervention centre, the organization began to receive desperate calls from people on the verge of committing suicide due to stigmatization by their community after having been diagnosed with HIV or AIDS.

“The toll-free line was launched in 2003, when the issue of HIV and AIDS was like a taboo. People often felt stigmatized and were afraid of going into counselling centres after they received a positive diagnosis,” said Florence Nkhuwa, the Co-Founder and Executive Director.

The organization has grown to have a national reach. It has introduced a toll-free line for gender-based violence (933), as well as a helpline (116) to address protection issues affecting minors and young adults.

Ms. Nkhuwa and a team of counsellors provide a “listening ear” to callers and make referrals for individual cases to specialized organizations within the protection network or to law enforcement officers.

“A simple act of picking up the call and talking to the person on the other side is therapeutic in itself,” said Mrs. Mirriam Zulu-Mulenga, Call Center Manager

The number of attempted suicide cases related to HIV and AIDS decreased from an average of 1,000 calls per month to about two calls per month in the past five years, according to Lifeline data.

“For the past five years, we have not received many suicide interventions related to HIV and AIDS. We attribute this to our collaboration with protection partners and the Government in raising awareness of the fact that HIV/AIDS is not a death sentence,” emphasized Ms. Nkhuwa.

Since March 2020, Lifeline/Childline Zambia has become more involved in managing mental health issues related to the impact of the COVID-19 pandemic.

“COVID-19 caught many of us unaware and unprepared. People’s lives have been negatively impacted, including our operations, and people are not coping. We have noticed a 20 per cent increase, from an average of 3,600 calls per week to about 6,000 calls per week,” Mrs, Mirriam Zulu-Mulenga said.

The organization attributes the increase in the number of calls to the COVID-19 restrictions on movement, which have resulted in reduced one-on-one counselling at the aid support centres and limited physical movement. Incidents of gender-based violence, child abuse and domestic violence have reportedly increased, particularly in the informal settlements.

“Many women are complaining about the friction in their homes, as the husband is not going to work and there is no more income. This has resulted in increased frustrations, mostly resulting in physical attacks and/or verbal accusations,” Ms. Nkhuwa said.

The confinement of children at home in the informal settlements has also resulted in anxiety and frustration. The organization has been offering counselling services and sharing information on extracurricular activities that children can engage in.

To remain fit for purpose, Lifeline/Childline Zambia has upgraded its system to include more telephone lines and is offering information on COVID-19 prevention and protection through WhatsApp and Facebook. 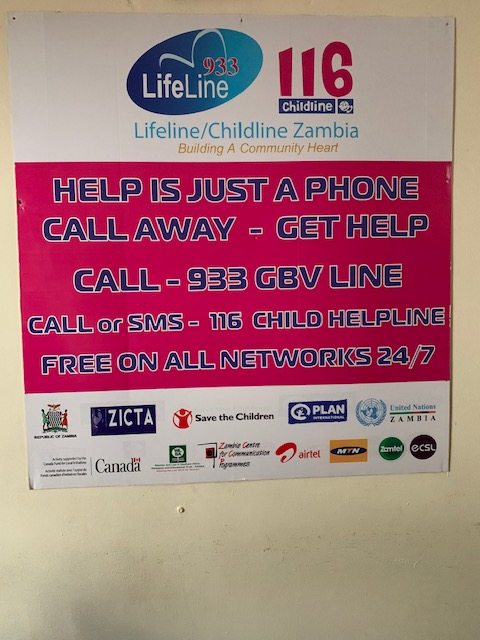 What keeps Ms. Nkhuwa motivated 18 years later is the people Lifeline/Childline Zambia serves and the impact the organization has made.

“What we are offering to the people drives me to believe that our services are needed,” she said.

“As each day passes, COVID-19 becomes a reality. Despite the risks to ourselves, as front-line workers we need to save lives by giving the right information. What motivates us is the thought of what would have happened to the people who called in desperation if we were not there,” Mrs. Zulu-Mulenga said.

Our counsellors are ready!

Stay aware of the latest information on COVID-19 , available on the WHO website and through your national and local public health authority. Call 933/ Text /Call 116 for more information, 24/7